Jed Williams was born in Philadelphia, USA, in 1975 and brought up in Paris, France; he is a French and American dual citizen now based in Philadelphia, USA. Jed comes from an artistic background--His father was the celebrated poet C.K Williams and his mother, is a jeweler. Jed makes art to deal with his autism and different feelings. A noted and prolific Philadelphia painter, Jed graduated from the University of the Arts (BFA in Painting and Drawing, 2000) and the Pennsylvania Academy of the Fine Arts (Certificate in Painting, 2005), both located in Philadelphia. Since graduating from the Pennsylvania Academy he has been exhibiting his work in both solo and group capacity in many different venues in Philadelphia, Phoenixville, New Jersey, New York City, Brooklyn, Miami, Portland OR and other cities. He has been covered by several media outlets and blogs in Philadelphia such as DonArtNews, the Philadelphia Inquirer and the City Paper. 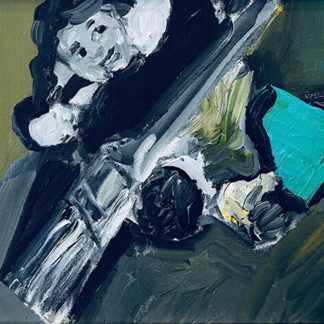