Sal Panasci of Devon, Pennsylvania is a 1971 graduate of the Philadelphia College of Art, where he received a BFA degree in Graphic Design. He began his career in advertising in New York City, but soon moved to the Philadelphia area. Over a 25-year career, his work was well respected and highly recognized, receiving many national and local awards. His career came to an abrupt halt in November,1995. He was a passenger in a taxi accident, which resulted in his being diagnosed with a Traumatic Brain Injury and blindness in one eye. Panasci spent 16 months in rehabilitation. Panasci makes his home in Devon, Pennsylvania with his wife, Linda and can be reached via e-mail at salpanasci@comcast.net

Artwork featured in online gallery only. 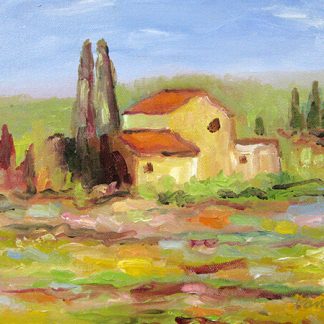 You're viewing: Landscape with Farmhouse, Tuscany $225.00
Add to Cart