Close up on guitar with blooming rosemary sprig. Print is 8x12" matted and framed with frame size approx 13x16".

Deborah Chava Singer is originally from California and now lives in Washington state. She began sharing her art as a part of a creative writing and performing group, Queer Players. She moved to Washington due to needing assistance from family for her disability; but has embraced the nature in the area, especially the trees. Her disability also influenced her by putting her mostly in the passenger seat on road trips. Used to doing more of the driving, this change led her to work on two series, Road Stories and Time.Light.Motion. She has begun work on a new series visually depicting her invisible disability. Her artwork has been published in Molecule, Harmony Magazine, Up the Staircase Quarterly, Blue Mesa Review, Cirque, and others and included in shows around the Pacific Northwest and beyond. 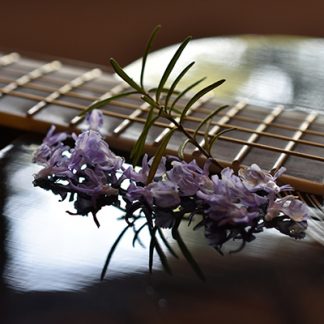 You're viewing: Ophelia and Rosemary $75.00
Add to Cart