I created this fish out of hand formed clay pieces. I then hand painted each piece and re-assembled the fish. I painted a background onto a canvas using acrylic paint thickened with gel media. I then assembled the fish again onto the painted canvas. I later varnished the entire canvas.

Melissa Milton began creating art in 2017 after five years of being bedridden and homebound due to Dysautonomia and vascular EDS. Today, she recieves oxygen which allows her to have two 2-3 hour long portions of time each day where she can stand for up to 20 minutes at a time and/or sit upright continuously for that 2-3 hours. Melissa creates her artwork either lying down on her side or, when using wet paint on a canvas, by sitting on a floor. Melissa begins most of her 2D visual art with a story, idea, or question she would like to visually depict. These may become expressed as a memory, a philosophy, a fairy tale, a forewarning, or some other concept. In her 3D clay art, Melissa enjoys drawing the viewer into a world of whimsy. She says, "My artistic endeavors are really the main thing that has keep my spirits up and keep me going." 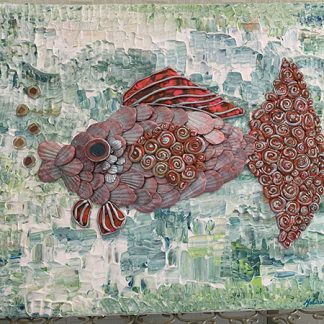